For human babies we know that:

Depth perception, which is the ability to judge if objects are nearer or farther away than other objects, is not present at birth. It is not until around the fifth month that the eyes are capable of working together to form a three-dimensional view of the world and begin to see in depth.

There are many techniques involved in the depth perception. For example parallax or occlusion. We can divide all of them roughly into the categories of monocular and binocular vision capabilities. 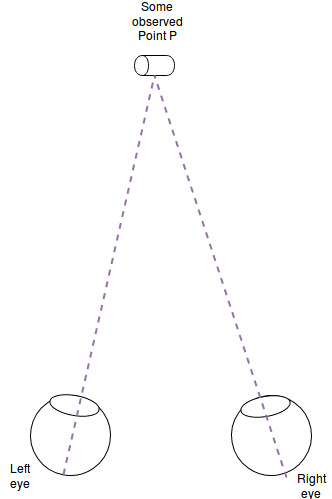 Two eyes/cameras at different locations look at the same object.

How can we determine the distance of the person to the object (“the depth”)?

How do we find the object from the left image in the right one?

This is called the correspondence problem. Generally speaking we try to identify areas of the left image which can be found easily in the right image. Obviously that depends on the image. Large homogeneous areas, like the sea, are a problem for this.

But searching the whole image is time intensive, right?

Correct! Epipolar geometry comes in handy here. Given a feature in the left image, we can restrict the search space to a single line in the right image.

If we have found the pixel positions of the same object in the left and the right image, how do we calculate depth?

Knowing the position and orientation of both cameras/eyes does the trick. In the simplest case: we calculate the distance between these pixel features and scale this “disparity” to the real world.

You can experiment with this by closing one eye, focusing an object near you, and then switch the closed eye to the other side. Repeat this with an object in the distance. The distant object moved far less than the one close to you! 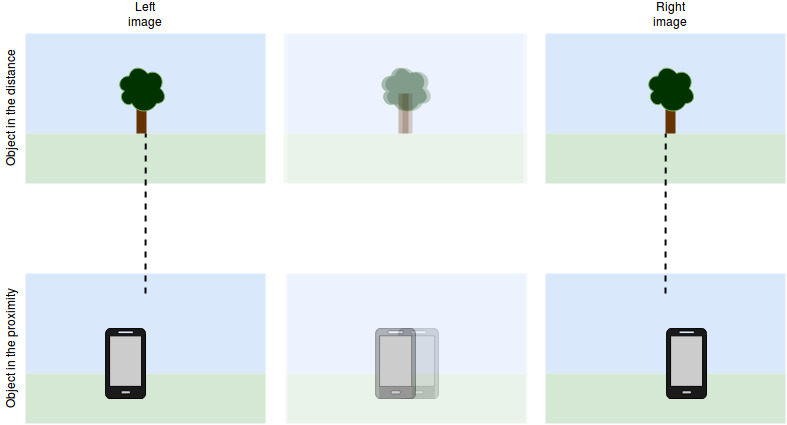 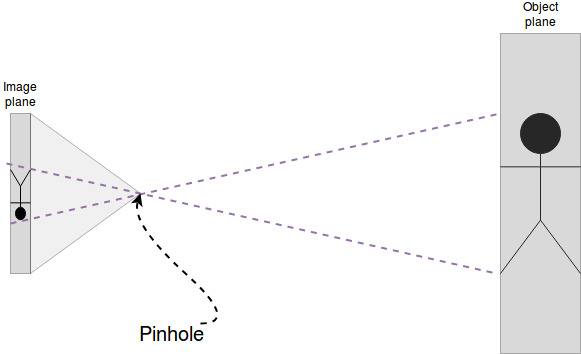 A point P on the object plane has camera coordinates \((x, y, z)\). In automotive vision we call them \((\xi, \eta, \zeta)\) The unit of these coordinates is usually something like millimeters. It does not matter as long as you sty consistent.

In case of the pinhole camera model the focal point is the pinhole therefore the camera coordinate system is originated at the pinhole.

A point (pixel in digital) image plane has the coordinates \((u, v)\) The usually-called y-axis is pointing downwards for historically reasons when images where incrementally built row by row on old television screens. 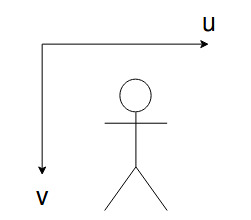 In order to make the calculations a little bit easier it is sometimes preferred to calculate with a camera in positive lay, because the image is not flipped upside down. 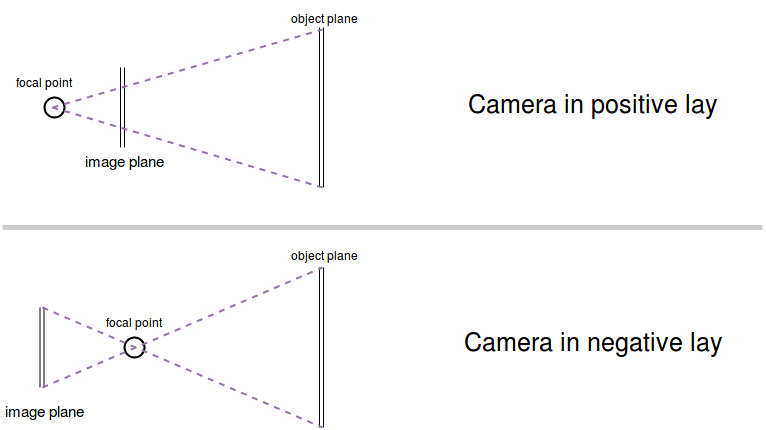 After settling the basics we can start to look at the situation. The only thing we have to know about are triangles. 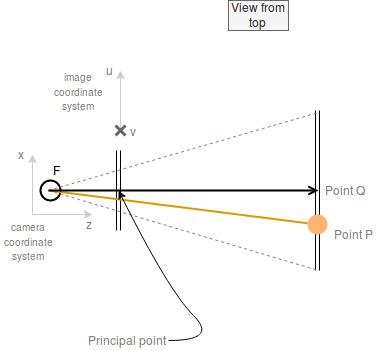 The orthogonality of the optical axis on both planes is important because from that follows that the two triangles are similar.

Figuratively speaking: You can take the large blue triangle “PQF” and scale it down to the red triangle without skewing it. 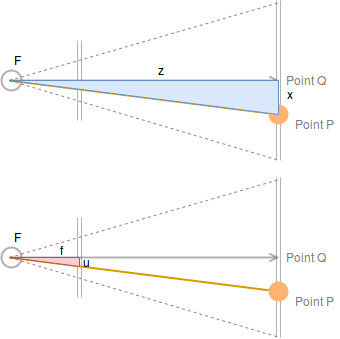 And the same for the y-dimension which is not visible in the diagram:

This is the basis for one typical type of math exercise we had at school:

Let us write the relationships from above in a single vector equation:

Let’s try this out on the Eiffel tower example. The Focal point would be the person. The image plane is the tree. So the focal distance is 8,5 meters. We know the tree is 10 m tall which is the value for v. And y=300m.

But actually the camera coordinates are 3d not 2d. Let’s extend this.

This is not really what we want because the image coordinates should not store the focal length. But we cannot write this with a scalar product because we want to treat the x and y value different from the z value.

We are looking for a transformation (a matrix):

If we multiply both sides of the equation above with the unknown “z” we can remove the z from the matrix so it only contains internal configuration parameters of the camera (namely f). This is the basic Intrinsic camera calibration K sometimes also referred to as intrinsics only.

There exists an extension to the basic camera model which allows to move the x- and y-coordinate of the princial point (\(c_x\) and \(c_y\)). And the focal length can be differentiated into a focal length in horizontal (\(f_x\)) and vertical (\(f_z\)).

Intrinsics of a real camera:

\(\gamma\) describes the skew coefficient between the x and y axis. It is zero most of the times. \(m_x\) and \(m_y\) are scaling factors which relate pixels to a distance measure (like millimeters).

The translation t is the difference of the origins (column vector with three entries). The rotation matrix R is a SO(3) matrix. Most of the time they are combined to a homogeneous transformation matrix:

The position and orientation of the camera in the world coordinate system are captured in the following matrix:

Using the intrinsics and extrinsics we describe the relationship of a pixel on the image plane and a 3d point in the world coordinate system:

The common appearance of C next to K is captured in the Projection matrix P:

Note: We can determine C and K a priori for a camera system. The only thing that is missing in order to calculate the 3d coordinate in the world is the depth z.

As long as we don’t have the exact z, the mapping is from pixels in the image plane to rays in the world coordinates.

To solve the depth problem (how to estimate the z-value) we introduce a second camera to our setup: 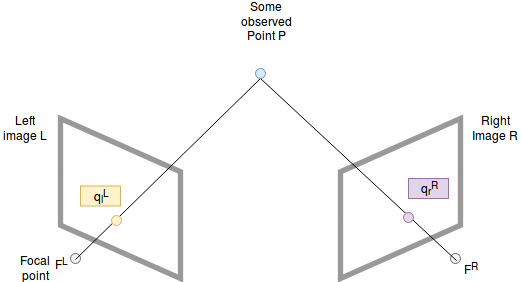 Both cameras observe the same point P. As mentioned in the camera models above they capture the ray from P to their focal points F in the pixel at the coordinate q. A coordinate in the left camera coordinate system is denoted with superscript L, for example \(F^L\), and a coordinate on the left image plane with lowerscript l, for example \(q_{l}^{L}\).

To make the calculations easier we assume the distance from the image planes to their focal points to be 1.

We can draw a vector from \(F^L\) to \(F^R\) which we call the baseline. It captures the positional movement between the two camera centers. 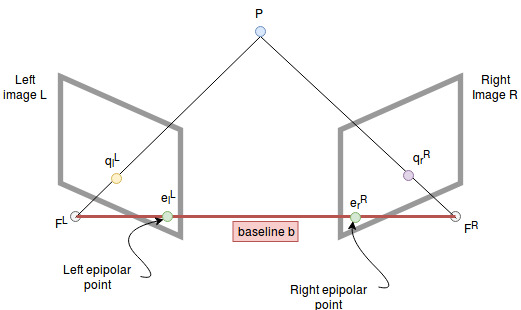 The intersection points of the baseline with the image planes are called epipolar points. The two focal points and the point P span a plane (yellow triangle) which we call the epipolar plane. 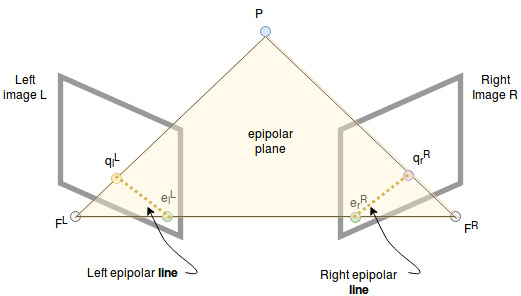 The intersection of this plane with the image planes are called epipolar lines. All 3d points which lie on the triangle are projected onto these lines.

Note that this equality only holds in one of the camera coordinate systems (either one is good) but not if the vectors are represented in different ones.

\(\vec{p_r^L}\) can be expressed as the connection between two points:

Rewrite the right arm as the difference between the left arm and the baseline.

Long story short: The right side is the difference between the left side and the baseline.

Note that we got rid of the baseline.

As we have seen in the camera model, a given pixel on the image plane captures a whole ray that goes through it to the focal point.

Mathematically this means that the ray has one dimension more than the pixel. This additional dimension is \(z\).

Therefore we have gotten the following relationship between a point in the camera coordinate system and on the image plane (focal length = 1):

and for the right side of the triangle:

Essentially we are using the simplest intrinsic camera matrix in order to project the point P to the image plane in the equation:

Because z is in both coordinate systems just a positive number, we can factor it out and it gets removed from both sides of the equation.

We can write the cross product with a given vector \(\vec{b}_L\) as a matrix multiplication:

Insert this into the central relationship:

Note: E only contains the geometric parameters of the binocular camera system. Which are the baseline and the rotation matrix D.

Insert this into the central relationship:

And now we can clearly see that E is constant and only \(q_l\) and \(q_r\) are variables. Suppose \(q_l\) was known, then the central relationship becomes a function of \(q_r\): The epipolar line of the right image plane.

The same works in the other direction. 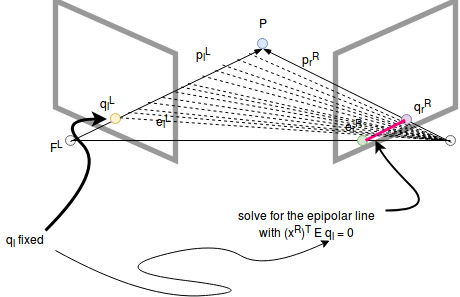 Note: If we pick a point in one image we only have to search on the epipolar line of the other image to find the corresponding point if it is visible.

Epipoles: As initially stated the epipolar line can be drawn through q and the epipole. This can be shown with the equation above.

Instead of calculating with camera coordinates q we want to calculate with image coordinate (u,v). Let’s modify the essential matrix to fix this. Every camera gets a matrix of intrinsic parameters \(A_l\) and \(A_r\). Remember that so far the focal length was 1 and we had no scaling factors in use.

There are two ways to obtain the fundamental matrix:

After a process called rectification (see below) we get to a simpler setup. Actually we can also try to setup our cameras initially like this (for example in cars). 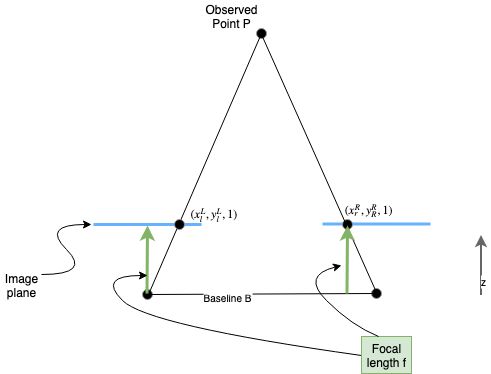 There are two equal triangles (red) which capture the relationship between the same point in the left and in the right camera image. The length of the yellow sides of the triangles are the same proportional to each others. The right triangle only has a yellow dot because the line has a length of zero in this image. 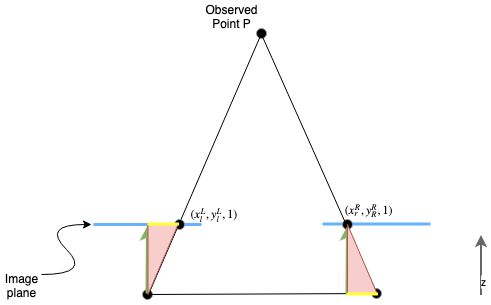 This is the relationship we humans “feel”: The closer the object the larger the disparity on the image plan.

This relationship can also be found in the baseline of the small triangle in the following image. Note the equal triangles!

General possibility for depth estimation: Calculate the disparity which is the baseline for the smaller triangle: \(d = x_l - (x_r - b)\). The \((x_r - b)\) means to move the red dot from the right to the left (see next image).

The ratio between the left and the right part of this smaller baseline is the same as for the bigger baseline: \(\frac{b_l}{b} = \frac{x_l}{d}\) 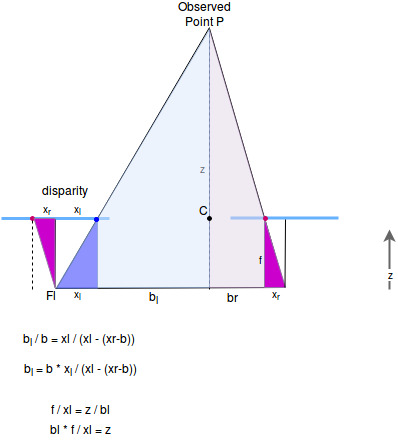 Find the intersection of the left and right arm. With the correct scaling factor \(\lambda_l\) the image point \(q_l\) becomes P:

We express the right arm of the triangle also in the left coordinate system: 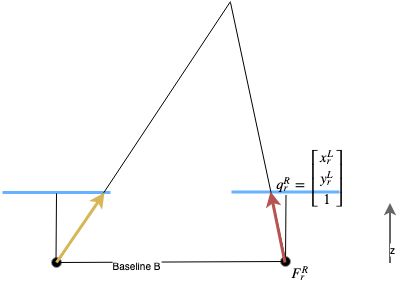 Now we know that both lines should intersect at P. So we solve for this point by setting the two line equations equal:

This yields a linear equation system:

Replacing the right lambda in (2) with the result from equation (3):

This is not surprising due to the results from epipolar geometry.

Now replacing the right lambda in (1) with the result from equation (3):

\(u_0\) is the position of the principal point.

In reality we can’t manufacture such a ideal camera setup. Therefore we change the images of our setup by a process called image rectification in order to align to a virtual camera setup which have the same focal length, are aligned perfectly and whose focal points match the original ones.

In the pinhole camera model we know the relationship between the intrinsics, the point p and the pixels.

We know that the relationship stays but the pixels change after rectification:

Now plug in the original definition of point p:

Having figured out all of the a priori knowledge we can calculate the left hand side. Imagine the result was \((a, b, c)^T\): 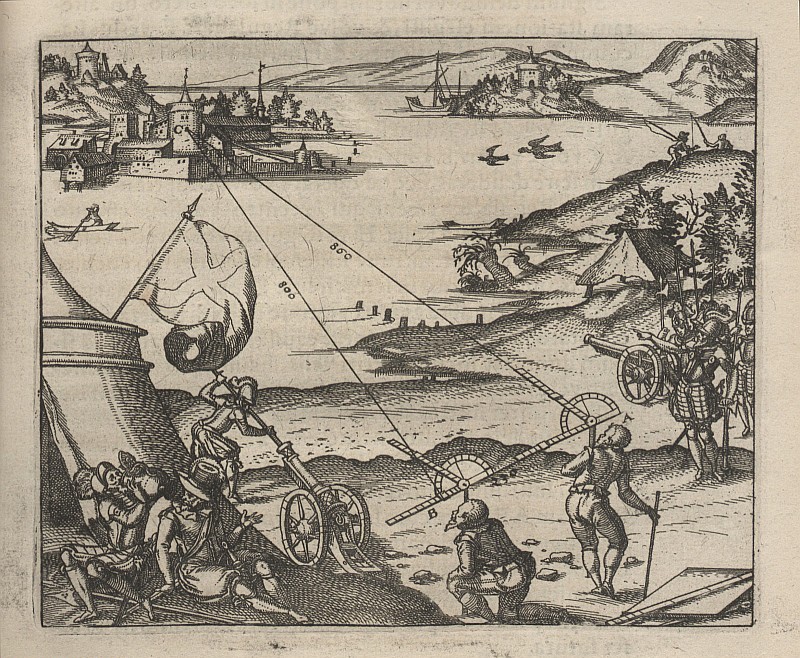