In computer science the building blocks of everything are ones and zeros. This simplicity is not an obstacle for building complex systems.

For Artifical Neural Networks the simple building blocks are the perceptrons. 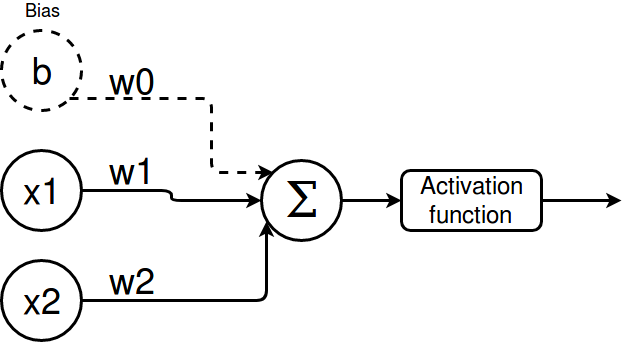 They work by weighting their inputs (w_0, w_1, ..., w_n), summing them up (Σ) and applying an activation function to the output.

Let’s look at an example with only one perceptron to understand why we want to use them in layers.

But what about non-linear functions

Or even more complex ones but chaining multiple perceptrons together will just mimic another linear equation system as long as the activation function is only linear (y = x).

The first choice for the activation function would be the cubic function itself. But I think approximating a function by using itself is not a valid solution.

Back to the question: How can a combination of linear functions (ReLU is still linear from -inf to ]0 and ]0 to +inf) approximate a cubic functions?

Well it is definetely not the most precise way to do it but the network could learn a step function like such because the ReLU can “activate” and “deactivate” whether the output of a perceptron shall be used. 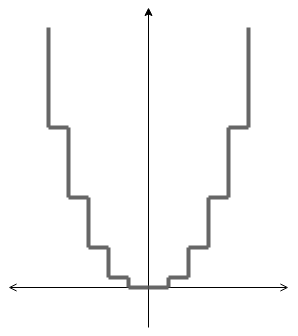 Learning the XOR function was a prominent example of what could not be approximated by a linear model. The following link (playground with linear activation) brings you to the playground of tensorflow. It contains the XOR classification problem and I preset the linear activation function.

It doesn’t matter how many epochs you are going to wait or how many hidden layers you add, the loss will always stay at around 0.5.

But if you switch the activation function to ReLU or anything else and add one hidden layer with four perceptrons you obtain a really good solution.

These networks are called feed forward because there is no backward loop as in recurrent neural networks. The perceptrons a. k. a. neurons are illustrated as single units but we are going to deal with them layerwise as vectors.

The following net shall be our example to solve XOR (layout taken from this youtube video): 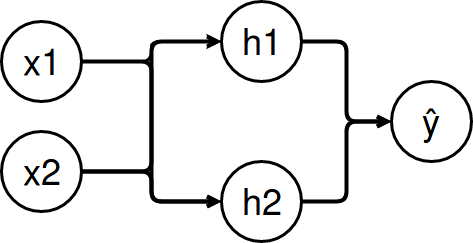 The calculation of every layer i consists of:

After the first layer the estimated values ŷ are used as inputs for the next layer and so on.

This post won’t explain how to train a neural network. It will only show how to feed the input values through the network to return a prediction (feed forward).

Let’s calculate the outputs for every possible input:

The results are exactly how we expect them to be. The original problem of a non-linear function can also be solved in other ways for example with the kernel trick which moves the non-linear function in another dimensionality where it becomes linear. Our network can be interpreted in the same way. The first layer projects the XOR function into another space. The perceptron in the output layer can then learn the parameters of its linear model to discriminate the two classes.